Random MIG is the name not to be forgotten when it comes to Badass boy in the service of Gangsterism!

It’s a joke, a little humor never hurts! In fact Random MiG is a good friend of mine with whom I collaborate on many projects. Owner of the Random Music Studio based in Trois-Rivières, Miguel is passionate about music recording and sound arrangement.

After working for several years on the self-production of his first album, Random MiG is finally ready, at the end of 2021, to unveil Starlight, an album that offers 10 tracks in multiple shades. It’s mainly with a rap vibe that MiG tackles quite controversial subjects such as the Rockefeller family, cryptocurrency, Maryjane and psychedelic drugs.

However, even if the subjects of the album are sometimes heavy, it is very easy to let yourself be carried away in this atmosphere which in the end is very Zen and relaxing! The album “Starlight by Random MiG is in my opinion the morning dose of positive energy necessary for a perfect day! 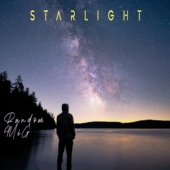